All Three USRT Entries on Podium on Sunday at Road America 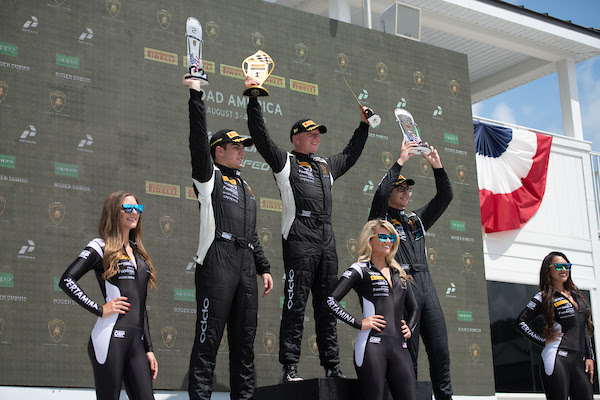 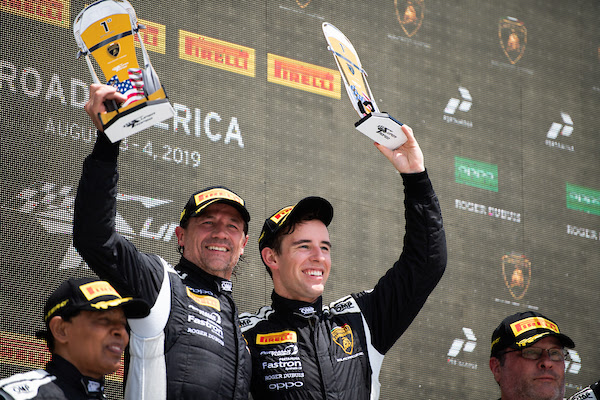 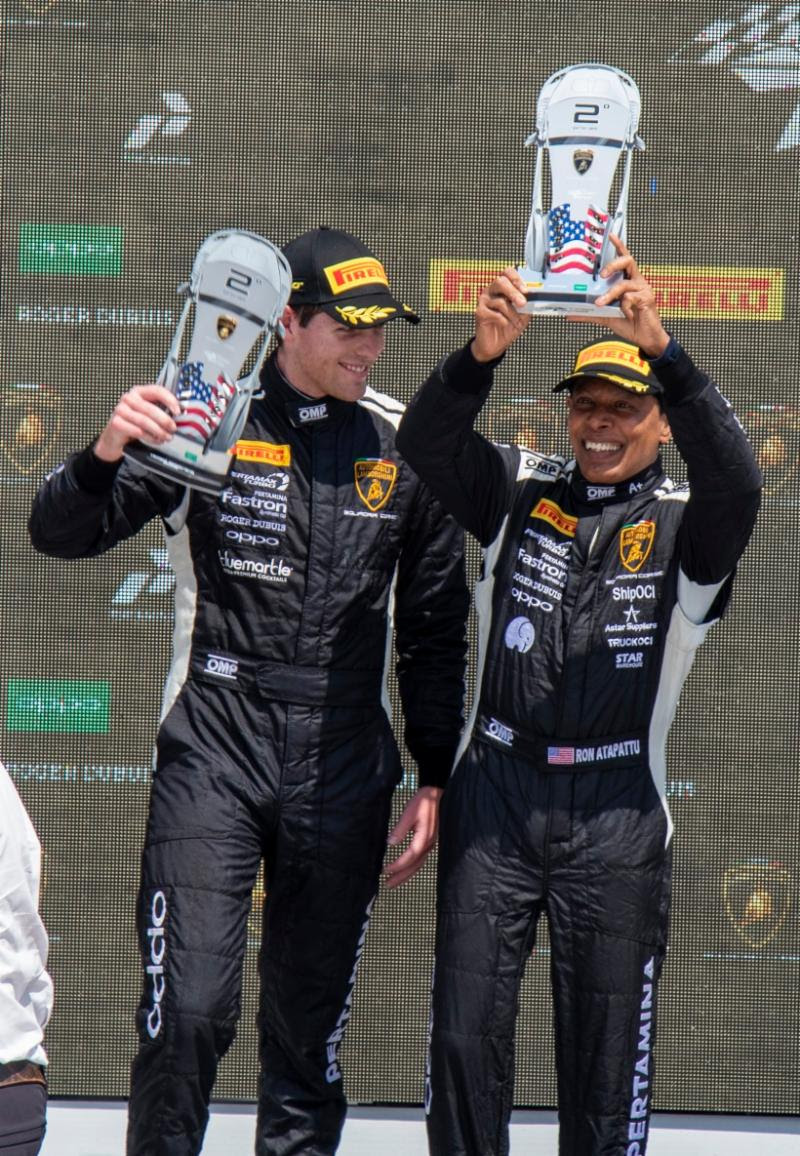 Monrovia, California (Tuesday, August 6, 2019) – Sunday was a great day for US RaceTronics, with all three of their cars finishing on the podium. After Saturday’s crash, Ron Atapattu offered his car to Bryce Miller and Patrick Liddy, but in the end the team moved Liddy into Atapattu’s No. 24 Elephantea Lamborghini of La Jolla and ran the pair in the ProAm class. Not only did the move give Atapattu his first podium of the season, but with strong driving from both drivers, the duo landed a second-place finish in class and ninth overall. Due to the move from LB Cup to ProAm, Atapattu had to start the race from the back of the field, but he drove a great first stint moving the car up three spots before handing it over to Liddy who drove an incredible second stint. Liddy was unstoppable. He passed five more cars on track in his quest for second-place in ProAm behind teammates Jacob Eidson and Damon Ockey.

Eidson started the race third overall and P1 in the ProAm class driving the No. 09 Lamborghini of Vancouver. He lost a spot on the start, but quickly got it back on lap four when he made a great pass on Corey Lewis. Eidson handed the car over to Damon Ockey from third-place overall, but Ockey was passed a few laps into his stint by Lewis’ teammate Richy Antinucci. Ockey kept the big picture in mind and kept the car safe for the class win, while still pushing hard to bring the car home fourth overall. The pair accomplished what they set out to do at the start of the weekend.; they had an overall podium and class wins both days and were able to extend their championship points lead to 33 points.

Steven Aghakani got his fourth podium in four races, finishing third in the AM class on Sunday. Aghakhani qualified second in class and seventh overall for the race, but lost a position early. He was making a pass for position in the second-half of the race when there was contact made with another car resulting in a spin that dashed the 16-year-old’s hopes for another class win and first overall podium of his young season. The team is confident that the youngster will put this disappointing weekend behind him quickly and come out stronger than ever at VIR.

The team’s next event will be August 23-25 at Virginia International Raceway. Stay tuned for more information on qualifying and race times.

Ron Atapattu – “The car setup for this race was much better than my first race and the car ran perfect. I had a good opportunity to pass a few people and Liddy did the rest of it. I’m happy to be here (on the podium).”

Patrick Liddy – “Great race. Ron drove an amazingly consistent race. He passed three other people and I believe he was P3 in class when I came in. I got the car in perfect condition; he gave me great tires. I just went out and made the most of it. I passed P2 with a couple of laps to go, so I’m really happy with the result.”

Jacob Eidson – “Another great race! We were able to get a pretty good start there and climb back up to P3 overall. Had a slightly hairy pass going into turn 5, but was able to pull it off and I noticed we were catching P2, which was great. I handed it off to Damon. He did a great job as well. Almost, almost able to get on the overall podium, but obviously having a class-win is the goal. I think throughout the season we’ll have some opportunities for overall podiums and we’ll just keep plugging away.”

Damon Ockey – “Pretty solid race. Jake had a great start. He went from third to fourth, but was able to make the position back again. He came into the pits in third-place. I came out in second-place, but a couple of Pro guys were really fast behind me and they were able to pass me. We ended up fourth overall; first in class. Great race! The car setup was awesome. US RaceTronics had a great car ready for us. Jake drove fast and I put down some pretty good laps for my class. I’m happy!”

Steven Aghakhani – “It was an okay race. I had trouble with the car the entire race. Tires were going away a lot quicker than expected. My pitstop was okay, but I had a little spin out in six trying to get past the car in second position. All-in-all it was a good race and we’re going to come back and learn from this again.”

Shane Seneviratne – “We had a great race! Jacob and Damon did an outstanding job! They finished first in their class and fourth overall. We had a little bit of bad luck with Steven. We got held up and I’m not sure whether we had some contact or not, but both McKay and Steven spun out. They fell back and after that there wasn’t much chance to catch the first-place car. It is what it is, but we still got a podium, so that’s good. I’m really, really happy for Ron and Patrick! They both did an outstanding job. Ron drove a great race and then Patrick brought home the car in a great finish for second-place in ProAm. Hats off to all the crew guys for all their hard work this weekend.”

US RaceTronics (USRT) originated in 2005, founded by Shane Seneviratne to compete in the Atlantic Championship, a formula race car series with races throughout North America. The team finished 5th in points its first year and continued its success during the succeeding years, ultimately amassing a total of 21 podiums, 7 poles, 5 race wins and finishing 3rd in the 2009 Atlantic Championship. USRT was put on hold after series officials announced the Atlantic Series was put on hiatus.

To follow all of the 2019 Series action and the US RaceTronics team, make sure to follow the official Twitter account @usracetronics for live updates along with Facebook.com/usracetronics and Instagram http://instagram.com/usracetronics. To become a driver, learn more about the series, or attend a race, visit www.usracetronics.com for more information.